Secure your spot and get started today with our EXCLUSIVE offer!

By opting into the web form above you are providing consent for Columbia Martial Arts & Fitness to send you periodic text messages. Standard rates may apply. You can reply HELP at anytime or learn more. You may opt-out anytime by replying STOP.
ACCESS OUR SCHEDULE
& EXCLUSIVE WEB SPECIAL

Secure your spot and get started today with our EXCLUSIVE offer!

By opting into the web form above you are providing consent for Columbia Martial Arts & Fitness to send you periodic text messages. Standard rates may apply. You can reply HELP at anytime or learn more. You may opt-out anytime by replying STOP.

Great place! They are great with kids and they show that they actually care about the kids success! They also give the kids the confidence they need to bet better all around!

CMA is great! It's family owned, this family takes pride in what they do. It's great structure for the whole family. We really love how they don't just focus on martial arts, but objectives for home and school. They want the kids to succeed in all areas of their everyday lives. We highly recommend cma for your choice of martial arts fitness hands down.

I have been training here for about a year now and it's been an amazing experience. I'm grateful for all that I've learned up to this point and look forward to continue to grow and improve. The best martial arts school in the Columbia area hands down!

If your looking for a great place to train look no further. RCJ Machado BJJ is practical for self defense and competition. I love that no matter where I visit RCJ Machado BJJ is nearby. Hope to see you on the mat at Colombia Martial Arts & Fitness.

Columbia Martial Arts & Fitness is the best gym in S.C. I recommend anyone that's seeking a great gym to get in shape and build Confindence Movitation Attitude Cma is the place. We have great instructors and Sifu Mark Mills and Tonya Mills and their staff treat everyone like family. I love this gym

I can't say enough good things about this place. My boys have been going there for about a year now or longer and have learned so much. The instructors are awesome and really care about the kids Learning what they are teaching. It is just a great place and a good atmosphere for kids. I'm so glad we found it!

The experience continues to be positive and awesome for three of my grandchildren. Ages 3, 8 boys and a 9 yr old girl. They are all ecstatic about attending. They have a blast. Although it’s only been 4 weeks, I believe there has been some improvement with some attitudes about responsibility. Time will surely tell. Mr. Ben and the other instructors are among the best in knowledge and personality. I think I enjoy watching just as much as the kids enjoy doing it!! Don’t see any stars - but I’d give them all that I could!!!

I'm not sure how I've never rated CMA. I've been training with Sufi Mark for years and look at him as one of my mentors. CMA is my favorite place in Columbia to train. With the various martial arts programs offered, I don't think anyone else comes close to the variety and skill lever of these guys. If you are in Columbia and are looking for a place to train martial arts for yourself or your children then most definitely check out CMA.

Great facility in good location! Well managed & organized. The owner is friendly & very well qualified. Kid friendly with an array of programs to fit your family. I was very impressed!!!

Which US Presidents Studied Martial Arts? 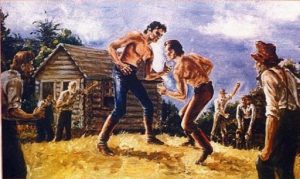 5 Presidents Who Studied Martial Arts
The term “Martial Arts” is a relatively broad expression that encompasses a
variety of different disciplines. Typically, when we hear the words martial arts,
the first ideas that come to mind are one or more of the techniques that have
developed in Asian countries. However, the martial arts are comprised of most
types of fighting techniques that focus on hand-to-hand combat.

Historically, there have been a number of Commander-in-Chiefs who have
studied at least one of the martial arts. Most often, wrestling has been the
discipline of choice, but there have been a few who’ve gone with disciplines
that originated in Asia.

George Washington’s Defense Against Bullies – Wrestling
Washington was not the type to take an attack lying down, not even at 15. To
deal with bullying at school, He became proficient in an old Irish folk wrestling
art. This art, called “collar and elbow,” involves learning a series of Kicks,
Throws, Trips, Pins, Chokes, and Locks.

Abraham Lincoln – Bully Fighter
Long before he was president, he was known locally for his size and strength.
Also skilled in collar and elbow wrestling, he was once asked by the locals in
Illinois to take on the town bully. Lincoln agreed. It was no contest. Problem
solved.
Even after he began his political career, he would intervene if he saw a bully at
work. Once, during his legislative bid, he saw one of his supporters being
roughed up during his speech. He stopped speaking, tossed the guy 10-12 feet,
then went back to his speech.

Ulysses S. Grant – Recreational Wrestler
Also a wrestler, Grant would sometimes let his form of martial arts have an
effect on his work. In fact, during the famous surrender of the Confederates at
Appomattox, it’s said he apologized to General Robert E. Lee for the disarray of
his camp. Apparently several of the “boys” had joined Grant for an evening of
wrestling the previous night.

Theodore Roosevelt Takes on Judo
Teddy Roosevelt took up demanding exercise to help treat the illnesses and
asthma he suffered as a child.
Known to be extremely adventurous, once during his travels he had the
opportunity to see a demonstration of one of the popular martial arts, Judo.
After seeing it performed, he knew he had to give it a try. He eventually
achieved the rank of 3rd Brown in Judo.

Barack Obama Practiced Taekwondo
Barack Obama trained in Taekwondo while still in Chicago, IL when he was
working as a professor and part-time state senator. His instructor was David
Posner, who remembers him as a very diligent and disciplined student.
President Obama eventually earned a green belt for this discipline of the
martial arts.
Then, in 2009, during his presidency, South Korean president Lee Myung-Bak
awarded him an honorary black belt during a visit to South Korea.